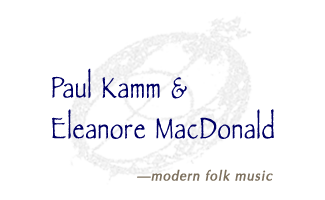 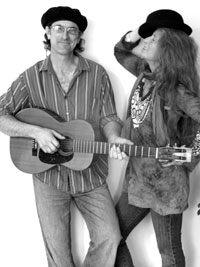 For almost 30 years, Californians Paul Kamm and Eleanore MacDonald have been honing their remarkable musical gifts, all of which are on display on this, their ninth album of original music. First and foremost, they sing in gorgeous vocal harmony, trading off the leads between Paul’s soothing tenor and Eleanore’s strong soprano. They accompany those harmonies with string arrangements that are at once tastefully spare and deceptively lush, making a few carefully chosen instrumental parts sound like a full band. Often, those parts are performed on unusual instruments, such as cajon, tambino,kora, kuttro, jawungo or tenor guitar, selected especially for their particular sound.

Paul and Eleanore draw deeply from both the traditional and the modern folk idioms. Their songs pay homage to American styles from folk balladry to Gospel, as well as Latin and African rhythms, but those styles are updated for modern sensibilities.  For example, the stirring ‘Ship Gonna Sail’ uses the traditional form of a cappella call-and-response but is accompanied by rap-style vocal percussion.  Similarly, the themes of the songs draw from the inspirational and protest songs of the folk tradition, including quotes from civil rights leaders, paeans to the coming of peace and justice and references to the “ancient wisdom of Mother Earth”.  The album also features an elegiac but upbeat song for the recently passed Utah Phillips, a mentor and friend of the artists, who co-wrote another of the songs. Although Paul and Eleanore have never enjoyed widespread success, their beautiful music cannot help but move those who do encounter it.  SS

I remember well a cold afternoon in the winter of 1996… Frigid drafts blew through my small, poorly insulated apartment on the outskirts of Nashville where I was building something called a “website” for musicians and listening to various CDs as I cobbled together HTML code.

As one CD ended I put on another that somebody had sent me.  And suddenly, the drafty chill was dissipated by an unexpected harmonic warmth.  And I literally looked at my stereo and asked myself…”who are those people…?”

Those people were Paul Kamm and Eleanore MacDonald, a duo from the Sierra foothills of central California who have been writing, recording and performing together for more than two decades.  And the harmonic magic that enchanted me those many years ago has awakened again with a new CD. From the Fire (iTunes / CDBaby) is Paul and Eleanore’s eighth release in a discography that remains eminently listenable from the first.

Music writers will sometimes write of the powerful, natural blend of “sibling harmonies.”  That sort of organic vocal blend that first caught my ear remains the prominent feature here. Paul and Eleanore are not siblings, they are a married couple approaching their silver anniversary. But it is hard to imagine any two voices that were ever more destined to sing together.
Listen to tracks from the new CD here:

Paul and Eleanore divide their time between their home in California and a refuge in the Greek islands; They often speak in reverent terms of the muse that resides beneath the azure waters of the Aegean Sea.  So it’s fitting that the album opens with an ode to their gratitude — If You Hadn’t Been Lucky. But it’s hard to tell if Paul is writing of their muse — or of Eleanore herself…

The muse having been duly acknowledged, our troubadours shift focus to a more corporeal influence.  From the Fire is dedicated to the late Bruce “Utah” Phillips, the legendary folk icon and activist firebrand who lived near Paul and Eleanore in the Sierra Foothills until his death in 2008.

“He was our mentor, our Elder, a good friend,” Eleanore tells me. “He was a Wobbly and an anarchist; he told the stories of the real folks who gave us our rights (8 hour work day, no child labor, and on and on…) who we don’t learn about in our school texts or history books.  And he is THE one who encouraged us to get out on the road. He took us with him to the East where we opened for audiences at Café Lena, Folkways and other great places. He always urged us on.”

The spirit of their mentor is convincingly evoked in From the Fire, a song that urges us to recall the forgotten stories of those who have dedicated their own lives to improving the human condition:

According to Eleanore, From the Fire is “all about Utah’s telling of, and keeping alive, the tales of the real people, their hard work to birth the things that matter, rights all born of the struggles, from marching in the streets and protesting and fighting and never giving up, all coming from someone’s blood, sweat and tears… Those real stories come ‘from the fire….’”

And from that same fire, Paul and Eleanore draw a rich and delicate canvas of reflections on “life, the world, politics and everything.” As the duo’s principal songwriter, Paul takes the lead vocal on many of the compositions, but Eleanore takes center stage on the third track To Let The Lightt In“

"So everything you can beg steal or borrow
You set out on the steps for free
Cause all the wild things, the lost and abandoned ones
Are really more your family tree”

Now listen to Eleanore’s tranquil vibrato on the refrain,

“All you seeking peace… come on….”

…and you will hear a voice drenched with conviction.  You cannot hear these vocals and not be touched by the urgency in Eleanore’s voice — even more so when they are reinforced with the duo’s vibrant harmonies.

These people want to live in a just and peaceful world.  Cynics desist: you cannot tell them that this is not possible.  Paul and Eleanore possess the power and the vision, and they will do all they can with the music they put into the world to make it happen.

And so the tune that follows, Quiet Voices, is a call to action with a “world music” quality:

All of these songs are built on Paul’s elegant, intricate acoustic guitar, played with a delicate finger-style virtuosity.  All the instrumentation is tastily embellished by contributions from long-time collaborators such as Nina Gerber on lead acoustic guitar and Mikail Graham on variety of instruments.

Paul and Eleanore take a willing risk when they set their own brilliant songwriting aside to take a page from the Utah Phillips songbook with the a capela incantation,  Ship Gonna Sail – a  collaboration with Phillips that offers up a veritable who’s who of the progressive movement over the past two centuries. 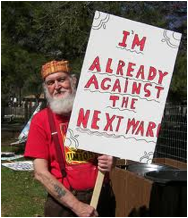 “He asked us to write a ‘rally’ song with him,” Eleanore says. “That’s how Ship Gonna Sail came about.  We hated performing it with guitar, in it’s original version, though - it was dorky/folky as hell. But the cool thing about singing it with Utah was that he would go off on some rant about the folks mentioned in the song, telling their tales.”

Most of the names mentioned in Ship Gonna Sail — Martin Luther King, Eugene Debs, Caesar Chavez – are universally familiar, but you can tell how deeply these people are steeped in the lore of both historic and contemporary populism when you Google some of the more obscure entries, like Judi Bari or Dorothy Day.  Utah Phillips knew his activist stuff.

The song reminds us that any improvement in the human condition stems from the courage to take a solitary stand in the face of great odds — and the likelihood that results will be long in the coming.  The chorus invokes the boundless optimism that activists share with shipbuilders:

From Ship Gonna Sail we’re asked to look inward on The Walls of Paradise,

And then there is Dark Seed, a song that honors the ancient wisdom of our mother Earth, and the peril that awaits, thanks in no small part to the “Greed is Good” culture that has gripped the world for the past 30 years:

“Now we’re building food like we build cars
Like it’s just a simple plan
And while we stitch and sew
and ignore what’s behind the veil
it’s a dark seed
and we’re pulling on the dragon’s tail
But no shadows prey upon your mind
When you’re making lots of cash.”

From the Fire closes with Silent Angel, with Nina Gerber’s guitar adding a touch of island flavor that reminds the listener of Paul and Eleanore’s affection for the Aegean Islands, where

"Silent Angels
On the Water
Watching over us tonight…
Silent Angel, silent angel
Is that you in my dreams tonight
She lights the fire and waits for you there
Your tears of joy the only jewels she’ll wear”

From the Fire offers proof that there is great music being produced all over the country (and the world) not just in the recognized music centers like Los Angeles, New York, or Nashville.

So much music coming out of those places these days serves as mere background noise.  But these songs remind me of the days long ago when I would sit with a new record, and put on headphones (real headphones, with liquid-filled padding, not the tiny/tinny ear “buds” that come with an iPod…) and read the lyrics.  This is music you want to sit and listen to, with lyrics you want to understand and absorb while the harmonies embrace and warm your soul from the ears inward.

Paul and Eleanore draw you in with their crystalline harmonies and delicate instrumentation.  Then you find yourself listening to lyrics that are worth listening to again and again.

And when you have finally had all you can handle, you find yourself staring at the speakers. And you know well who those people are.

—Visit Paul Schatzkin's website:
http://www.cohesionarts.com/paul-schatzkin-bio/
ALLAN WILKINSON • NORTHERN SKY
This thoroughly enchanting ninth album release from Nevada City-based duo Paul Kamm and Eleanore MacDonald, once again demonstrates a varied approach to conveying modern folk songs and therefore maintains interest throughout. The duo incorporate political commentary, environmental issues and animal welfare with nine self-penned songs and the one co-written song, Ship Gonna Sail, with words by the late Utah Phillips.
The title song From the Fire was also written for the duo's friend Utah Phillips, which indeed incorporates a reference to the aforementioned Ship Gonna Sail, which in turn contains many familiar political references, together with some contemporary beat boxing (or face playing) courtesy of Joe Craven.
With shared responsibilities in the vocal department, it is with the harmonies that this duo excels. Fitting together dovetail-like, Paul and Eleanore's voices appear to be made for each other, augmented by some tastefully constructed arrangements. There's a lot of attention paid to rhythm and in places the album has a distinct World Music feel.
Those World Music influences appear nowhere more clearly than on the African influenced Quiet Voices, which features the traditional West African kora, together with the tambino, the kutiro and the jawungo, courtesy of Gordon Hellegers, Tom Menig and Rob Holland respectively, all of which adds colour to an already colourful selection of songs.
As well as the songs that lean towards a political nature, the questioning Song of the Land and Dark Seed address environmental issues, the former featuring some tasteful electric sitar and fiddle courtesy of Mikail Graham and Joe Craven, whilst the latter relies on a sparse arrangement to help get the message across. The social conscience theme that appears to reside in the very fabric of FROM THE FIRE, also includes a nod towards animal welfare with the poetic To Let the Light In, which celebrates those who 'care for the voiceless, lost and abandoned ones'. With some haunting pedal steel courtesy of Larry Tracy, this and all the other songs on the album provides food for thought, whilst at the same time delivering some memorable and inviting melodies.
Allan Wilkinson • Northern Sky
http://www.allanwilkinson.co.uk/node/1470 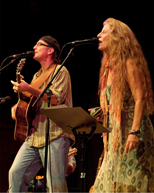 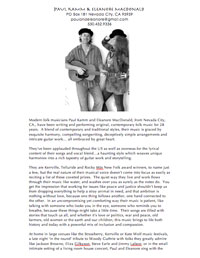